Homemade food to take with you, add hot water to finish. One practical creative side project.

This was almost named Vegan Cup-a-Soups. But cup-a-soup sounds cheap and too English.

The "vegan" tag has a lot of other baggage with it. And while the soups are vegan, I'm don't follow a strict diet. So plant-based is the trendy alternative!

I like projects and hobbies to be practical in some way.  Dance gives me social contact and active. Games exercise my mind and let me try out work-related ideas. If I try to make a pure creative project it still has learning at its core.

But that's not the same as trying to monetize all projects. Making instants soups isn't that.

It's a way to play around with ingredients, try different tastes, give options while travelling. Saving money would be a bonus.

So when I travel I prefer to don't do luxury. I'm happy spending some money but I also like a backup plan. And money saved in one place is spent in another.

Instant soups are an easy option in a hostel or late at night where nowhere near is open. When camping or as a general backup. Often you'll have access to a kettle. It has served as a breakfast, snack and emergency meal

I haven't had to try them with cold water yet...

[Image of Homemade Instant Soup- made]

I started with branded instant soups which can taste ok. But they carry undesirable extras finding vegan ones is challenging. So being curious I searched for ways of making it myself.

There's good advice out there for homemade instant soups and  veggie soup recipes. But I couldn't find much for vegan instant soups.

But I decided to go with one to fit a vegan diet. We get more creative with boundaries in place.

So the creative cobbling together of something edible began

The local supermarkets had some options but the first main obstacle was vegetables. Dried vegetables. There was advice for dehydrating  with a special machine or in the oven.

But that looked like hassle so I found some helpful folk who did large packets of dried veg online. [Link]. It was a good place to start.

I keep an eye out whenever I'm in new food shops. Since moving to Exmouth I've discovered a local shop [Mother Earth Liknk]  which stocks a few more options.

The first attempt was terrible. Using pasta that needed longer to be ready and combining ingredients that don't go well. It lacked flavor and needed more bulk.

But I can eat most things and the next one was a slight improvement. Ingredients were added and others removed. Experiments performed with quick-cooking pasta, stock cubes added and more online articles found.

The lastest one I made was edible, and next stage is to take them on travels. Which is handy as I'm planning new trips.

I'm working on a tomato based one, I spicy version and mushroom and veg based. If I get happy with them a follow up article will have recipes.

The ultimate test is getting others to try them!

So this is a creative side project. There's no art and nothing to sell. No life-changing lessons.

But it's practical, useful and a chance to experiment.

What are your practical side projects? 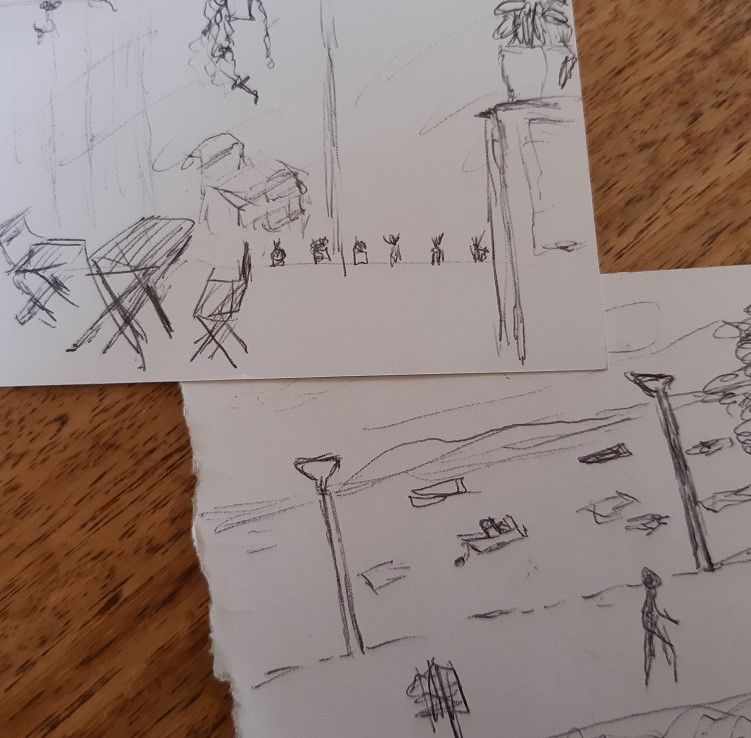 Taking up sketching again in an easy way after a covid gap.
tory Icons is a long term project for me. It started a few years ago on Chartopia as an experiment and has progressed with Pirates and Cyberpunk. It's an ongoing project which is fun, challenging and creative. And is also language-independent and has the potential to be much more.
So this post is a hard one to write. The Rule of

Taking up sketching again in an easy way after a covid gap.
tory Icons is a long term project for me. It started a few years ago on Chartopia as an experiment and has progressed with Pirates and Cyberpunk. It's an ongoing project which is fun, challenging and creative. And is also language-independent and has the potential to be much more.
So this post is a hard one to write. The Rule of